Kazakhstan’s residential construction sector has received a massive boost to start the building season – the country’s President, Nursultan Nazarbayev, has allocated 360 billion tenge, or over a billion dollars, to help build affordable housing in Kazakhstan. 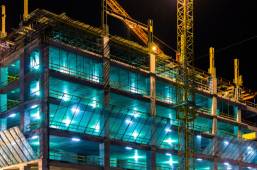 “This will help build an additional 1.5 million square metres of housing, making a contribution to GDP growth,” Nazarbayev announced on 10 February. He confirmed the price of the housing would be ‘socially-oriented’, with the aim of giving as many Kazakhstanis as possible the chance to buy or rent the newly-built homes.

Kazakhstan's economy has been growing at around two and a half percent over the past few years, according to statistics from the World Bank, but construction, particularly house building, is promising to beat this. The industry figures from the past year certainly back this up. According to Kazakhstan’s state statistical service, total housing completed in the country was 8.9 million square metres, nearly 19% up on the total from 2014. A number of factors are driving the increase – older housing units are being replaced with modern facilities, and the population has grown by 14% each year since 2010.

It is clear that Kazakhstan needs new housing units, but there is no point building them if the people cannot afford to buy them. With this in mind, the support package also includes government-backed mortgages – a vital step in a country with 13.6% inflation last year. Governments around the region are stepping into the market to boost housing markets (including Russia, which announced government-subsidised mortgages last year to keep the real estate market buoyant), and Kazakhstan is no different.

Housing construction is not the only area to expect government cash in Kazakhstan in the coming year. At the same time as announcing the billion-dollar housing boost, President Nazarbayev also took the opportunity to order the government to ramp up spending on agricultural projects, school construction and infrastructure spending. The infrastructure spending will come from the ‘Nurly Zhol’ state fund, which assigned massive levels of investment last year to a wide range of areas – including house building, mortgage refinancing, and community services.

With these yearly injections of cash, and the demographic factors to drive demand, construction in Kazakhstan can look forward to a stable year. Add to this Kazakhstan’s great hunger for imported construction materials and products – with the President himself making the effort to welcome international firms to do business in Kazakhstan – there are plenty of opportunities for suppliers to get involved.