Wide range of power and luminous fluxes makes it possible to use it in very varied lighting situations. It will work perfectly as, e.g., city street lighting with pavements adjacent to the streets on both sides. Using the CORONA STREET LED with the power of 86 W and distributing 10 meter poles at a distance of 33 meters between one another, we achieve parameters required by class M4 on the roadway and lighting class P2 on both 2 meter wide pavements. 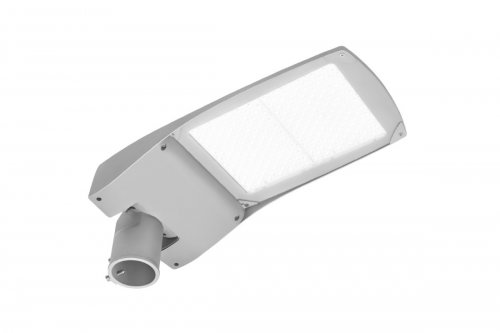 Moving on to the advantages of this luminaire, CORONA STREET LED with integrated, energy-efficient LED panel is characterized by high luminous efficacy. Its housing and holder were made from pressure die-cast aluminum which was powder-coated grey. The luminaire uses directional lens matrices made from PMMA, whereas the light diffuser consists of toughened-glass pane. Thus, the luminaire is characterized by a very high degree of tightness (IP66) and resistance to mechanical shocks (IK08).

The holder, which is integrated and adjustable in increments, makes it possible to adjust the angle of illumination. It is also equipped with SP10kV surge protection as standard. Its available options offered by Lena Lighting are as follows: DALI signal control and Line Switch, ability to program 5-step power reduction and CLO – constant light output. An advantage of the luminaire, which is hard to skip, is also its value for money.

The whole family of CORONA LED luminaires has been optimized in terms of the level and uniformity of luminance as well as the reduction of the degree of glare in such a manner so as to ensure maximum comfort of the users while meeting the requirements of normative acts in the most economical way. New CORONA STREET LED meets all the above premises and, in accordance with the manufacturer's expectations, it has a chance to become one of the best-selling products valued by demanding customers.

Come to the exhibition KazBuild 2018 and get to know the products of the Lena Lighting on 4-6 September in Almaty, Kazakhstan.

To visit the exhibition for free and avoid queues for registration

GET YOUR TICKET ONLINE NOW